Not hard rating This one 5 stars. One star less for a slow build up, but the other 5 for pure fun and goofing around with a ridiculous story, made with tons of heart and humour.

A bunch of medical students drive into the mountains to spend the Easter holidays in a cabin, in the middle of nowhere of the Norwegian snowy North.
After clowning around in the snow, drinking beer and telling fart jokes, an obnoxious stranger(director Tommy Wirkola quoted: Bjørn Sundquist practically being his obnoxious self)drops by asking for a cup of coffee.
He warns the students that the area was occupied by some really nasty sons of bitches Nazis during WW2, and to be on guard as the area has an evil reputation.
The Nazis tortured, dismembered and stole the locals valuables. Towards the end of the war the villagers gathered any weapon they could get their hands on in the name of revenge and uprising.
Armed to the teeth with knives, shovels, pitchforks or whatever, the Nazis were chased into the mountains where they froze to death, as the legend goes ...
The stranger is later found mutilated in his tent.
As the merry students sit and drink more beer, one of them (wearing a Brain Dead t-shirt) opens a hatch in the floor for more beer, discovering a little box containing jewelery and gold.
All hell breaks loose, as the Nazis soon defrost and rise, slaughtering anyone in sight.

The film was well received at the Sundance Film Festival, and even earned it some Scream Awards nominations for Best Movie Mutilation, Best Horror film...or something like that.

If I remember correctly, I think it made several headlines in the media here in Norway, giving it tons of free publicity.

Tommy Wirkola and the boys had previously made the low budget feature film "Kill Buljo", that turned out to be a hit worldwide. The film gained Tommy a good reputation as a filmmaker, earning a much bigger budget for his next film from the suits, and director Harald Swartz as Producer.

The production values are all top notch. Good filming, editing,special effects and a soundtrack full of Metal. Perfect for the films pace.

Most non Norwegian viewers won't get some of the typical northern bleak humour, but that's nothing to be worried about as it pleases audiences worldwide and especially fans of the "Splatter fest" genre.

There are so many memorable scenes to laugh at here:

The Nazis are even led by the feared Standartenführer "Hertzog", ha ha. (Ørjan Gamst from the Metal band Slogstorm). They are not your average slow paced zombies either. Herzog's stormtroopers are well organized, mean M.F's and quick. Not a safe soul in sight ...

My favourite scene has to be when one of the students makes a Molotov cocktail of Northern moonshine. He lights it, and throws it at one of the zombies through the window. He misses the window miserably from a meters distance, and accidentally sets the whole cabin in flames.

Dead Snow is a film made by fans for fans. I haven't seen Nazi Zombies since the awful film "Shock Waves" from 1977. And even though it has "Evil Dead" inspiration written all over it, it still deserves thumbs up for originality and guts. Well done boys!

Love it or leave it. 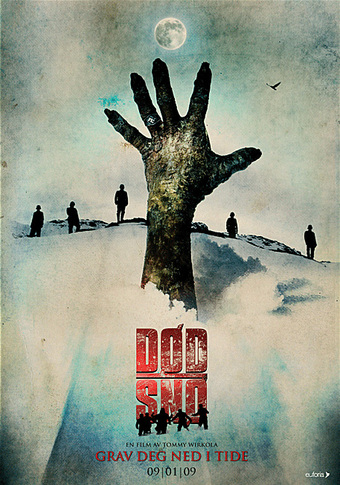 «The Personal History of David Copperfield»

«Take the Money and Run»

«The Man Who Shot Liberty Valance»